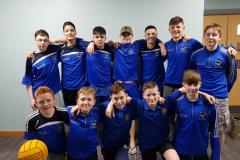 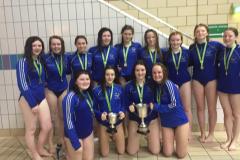 The tournament was open to athletes born in 2001 and later.

This year there were 8 teams entered into each of the Boys and Girls competitions and the groups drawn at the NWPC Meeting in Swim Ireland on Tuesday Jan 9th were:

The St Vincents teams performed really well throughout the tournament and both progressed to their respective finals.

Our Boys had a thrilling and incident-packed semi-final against Corrib, eventually progressing thanks to a penalty shootout. The character and resilience displayed in the semifinal was a sign of things to come as our boys took on a very talented Clonard team in the Final. We fought back repeatedly in the final – first from 1-3 and then from 3-5 to tie the match at 6-6 at the end of 4 quarters. The tension was almost unbearable as the two teams took penalty shots at opposite ends of the pool with Marius defending the St Vincents net and Alex, Fionn, Sean, Denis and Sam taking the penalties. Incredibly it was still tied after 5 penalties each and we moved to sudden-death where Fionn McConvey scored the winning goal for Clonard and our boys had to be content with silver medals. The St Vincents goal scorers in normal time were Alex San Emeterio (4), Ciaran Dunne and Fionn Camacho-Lenihan.

Our Girls had a slightly easier path to the final with a 10-2 semi-final victory over Diamonds. This set up a rematch with arch-rivals Tribes of Galway. The final was a tense and closely-fought match, clearly demonstrated by the 1-0 scoreline at the end of the second quarter and 2-2 at the end of the 3rd quarter. Jenny Dunne in goal performed heroics to deny Tribes additional goals. In a great final quarter, our girls scored 3 goals through Cliona Colvin (2) and Erin Kindlon and conceded only 1, leaving the final score at 5-3 and crowning our girls as Irish Champions for the 3rd year in a row.
The St Vincents scorers were Cliona Colvin (2), Aoife Hennessy, Cara Kindlon and Erin Kindlon and Cliona Colvin was a deserving winner of the Tournament “Most Valuable Player” award.

Both our Boys and Girls teams did us proud and we would especially like to thank Coaches Juan Iglesias, Steve Harris and Louise Hennessy and team managers George Dunne and Aveen Colvin who prepared the teams so well and guided them throughout the cup weekend.

The schedule of matches and the results were:

At the completion of the Group Stage matches, the Group Tables were: